Thirteen thousand, eighty-six words. One thousand, nine hundred and fifty-one lines of iambic pentameter. Two epic similes about how tall James Comey is. Here, in its entirety, unabridged, with every accompanying illustration, and for the first time with helpful line numbering, is PRIEBUS LOST, the definitive Paradise Lost parody of our time.

If you wish instead to read the individual chapters, click here.

This first Book proposes, first in brief, the whole Subject, the Base’s disobedience, then touches upon the prime cause of their fall, the Don, or rather Donald Trump. 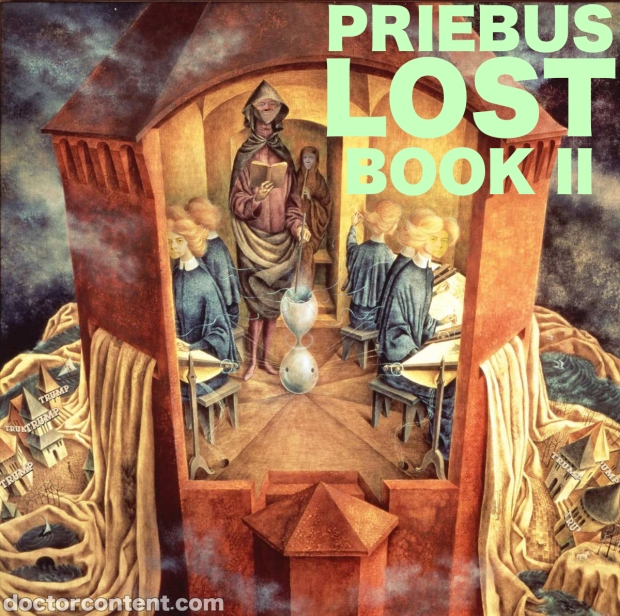 The Republican Predicament previously outlin’d, its Origins are here illuminated; the other Candidates detail’d, and their multitudinous failures to shackle the Demon in their midst chronicl’d. 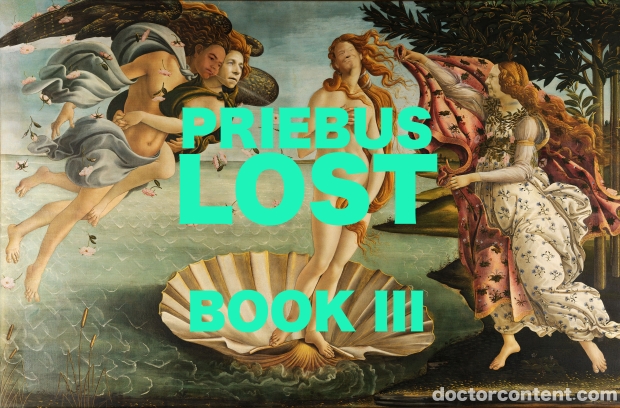 The Poem hastes to Trump’s Confirmation as the Nominee, introducing Priebus, lying on an office Floor, thunderstruck and astonish’d, but after some days recovers, and awakens his Lackeys. To these Priebus directs his Speech, and comforts them with hope yet of regaining the White House. 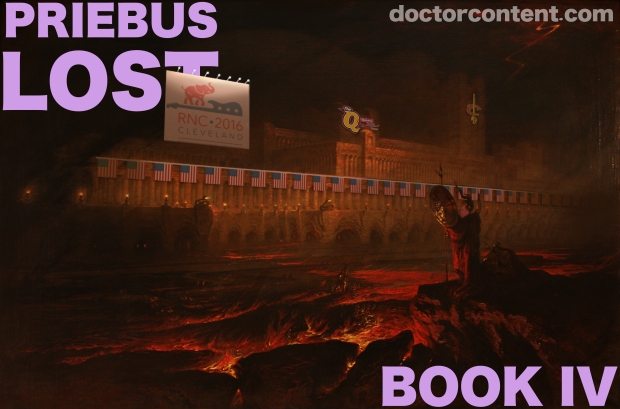 The Republican National Convention having been a greater Success than hop’d, Priebus sees his hope for Trump restor’d, but return’d to the Campaign Trail must contend anew with the dismal reality of the Candidate he has endors’d. 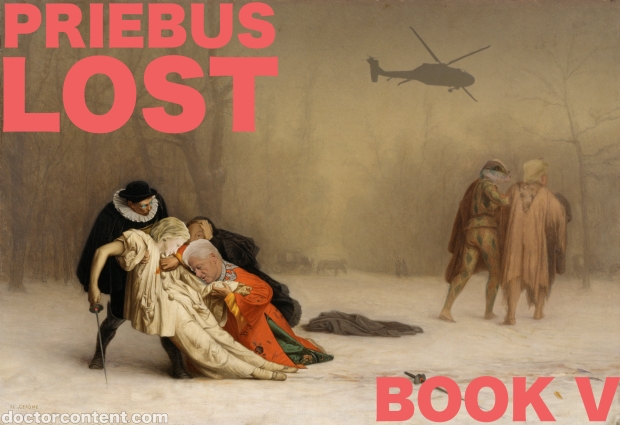 Hillary Clinton, being by some unclear Infirmity ushered away from public view, thus restores anew some small expectancy for Republican victory in November; by this new opportunity energiz’d, Priebus rallies his Party for th’impendent Debates.

BUT soon bright hope arose anew, the faint
And fading odds of victory for Trump
In merely moments heighten’d: for a Film
Of Hillary emerg’d, a damning Shot
Which showed her balance lost upon a Stair,
Only regain’d by th’intervention swift
Of her perennial Retinue, who snatch’d
Her tumbling form by th’elbow, and fast
Into a waiting van in fed’ral black
Deliver’d her, and to some secret Lair [10]
Away from prying eyes she disappear’d;
At which emerg’d the spawn of Infowars,
Wild-eyed Contingent birth’d o’th’ bellowing
And deadbeat Alex Jones, huckster entranc’d
With all Conspiracy, convinc’d that Trump
Alone remain’d between th’Americans
And the malicious Globalists who seek
Complete dominion o’er our heav’nly Sphere
Through Hillary, their foremost Adjutant:
With this fresh evidence that metal brace [20]
And careful occultation hid the truth
Of her ailing Condition from the world,
Their cries of Fraud renew’d, and fresh embark’d
On speculation rampant on her Health.
Of haemorrhages multiple, her Blood
Pregnant with Aneurysm, Seizures too
Uncheck’d and rampant, and Sclerosis far
And visibly advanc’d, such Maladies
By Parkinson’s, stopp’d Veins, and ailing Heart
Compounded, spoke her Critics with scant pause [30]
And unimpeach’d assuredness, and each case
As testament to her unready State
And her danger tremendous if bequeath’d
Ultimate Pow’r o’er th’U.S.A. with haste
Was seized upon; and soon their Postulates
And Convictions assorted were affirm’d:
For Hillary herself, desiring quash
The wild-eyed Speculations numerous,
Yet still surpassing frail, incapable
Of public audience though brief, at last [40]
Via Surrogate her Affliction confirm’d.
As Mexicans, by Trump and co. decri’d
As fearsome Savages unfixing bent
On the destruction of America
And all its residents, are nonetheless
Perceiv’d to be against a sturdy Wall
Of good construction pow’rless, passage through
To them denied, so scheming Hillary
Was by her Constitution frail contain’d,
Impeding her from reporting firsthand [50]
Her own Infirmity, which but confirm’d
Th’imaginations of the Right, which seiz’d
With glee this twist of plot. Fast the news spread
And far of her pneumoniac State, and soon
The desk and ear attain’d, and conf’rence held,
With none but the GOP Chair himself,
Ingenious Priebus, wise and steady Hand
Guiding American Conservatism,
Whose resignated air fast disappear’d
Upon his hearing; e’en a smile, scarce seen [60]
O’er the past year, return’d though tentative
To his unhopeful Visage, furrow’d deep
Long since by Trump’s disastrous utterings,
But liven’d now by fresh potential seen
For triumph in November, and domain
Return’d to the Republicans, main goal
For which he was elected to pursue
At any cost, to reinstate their Way,
Their Laws, across the land, and satiate
The billionaire Financiers who on th’ass [70]
Of all the Party rode without relent,
Dismay’d at the disastrous circumstance
Which had seem’d sure to impede their aims
Of carte blanche Rule bless’d by the G.O.P.
Thus Priebus, energiz’d anew with hope,
Restor’d in vigor, chance of victory
For once not pitiful, stood to address
His loyal crew, and reinforcement give:
“My Aides and Subjects, faithful Acolytes,
Adherents lifelong to the Principles [80]
Of Government small, and Liberty
Foremost to th’Individual designate,
Our long and thankless summer, endless hours
To research of our Foe in thankless slog
Devoted, has at last deliver’d spoils.
Our Enemy, dread Hillary, dire Witch,
Blonde Harbinger of national Decay,
Of Benghazi the one sole Architect,
And by mismanaged Emails tainted far
Beyond any who sought before that Seat [90]
Most high, and most requiring virtuous
And dignified comportment, has today
Upon her infinite Roll of sin
Fresh failure added: for her recent slip
Though quick disguis’d, did not the public eye
Evade, but rather rare confession forc’d:
She ails, Pneumonia the cause; a gaffe
Beyond the pale, proof unequivocal
That she’s no leader: more than just corrupt,
Unfit: our Nation’s myriad problems cannot [100]
To her frail will be trusted. So we must
Rally anew behind our Candidate,
With doubl’d effort advertise our Cause.
The mainstream News must know; we’ll send our best
To tell them, and appear in primetime; then
We must remind the public that there is
One man alone who this insipid rule
By sick and avaricious Baronage
Can decimate, and to the Commonfolk
Their rightful pow’rs restore. These artful moves [110]
Shall far and wide on th’Airwaves propagate,
And in the absence of that Crook, infirm
And therefore helpless, our Message unmatch’d
By all resistance quickly shall suffuse
The public mind; the mainstream Narrative
Before the first Debate shall thus be ours,
And the momentum, from the Democrat
By great and constant enterprise usurp’d,
We shan’t relinquish. Our incessant press
Upon the Crook’s credentials shall afford [120]
No momentary respite: constantly
She shall be forc’d, her record to defend,
Which she cannot; and in the Polls we’ll rise,
And we Conservatives shall have at last
Dominion o’er the White House once again.”
He spake: and to confirm his words, out flew
Dozens of glowing phones, drawn from the slacks
Of Party Officers; the sudden blaze
Far round illumin’d th’office: fast they typ’d
To tell their Staffers, and bright with rais’d hopes [130]
Took anew to the trail, with fiery Tweets
Hurling defiance at Crooked Hillary. 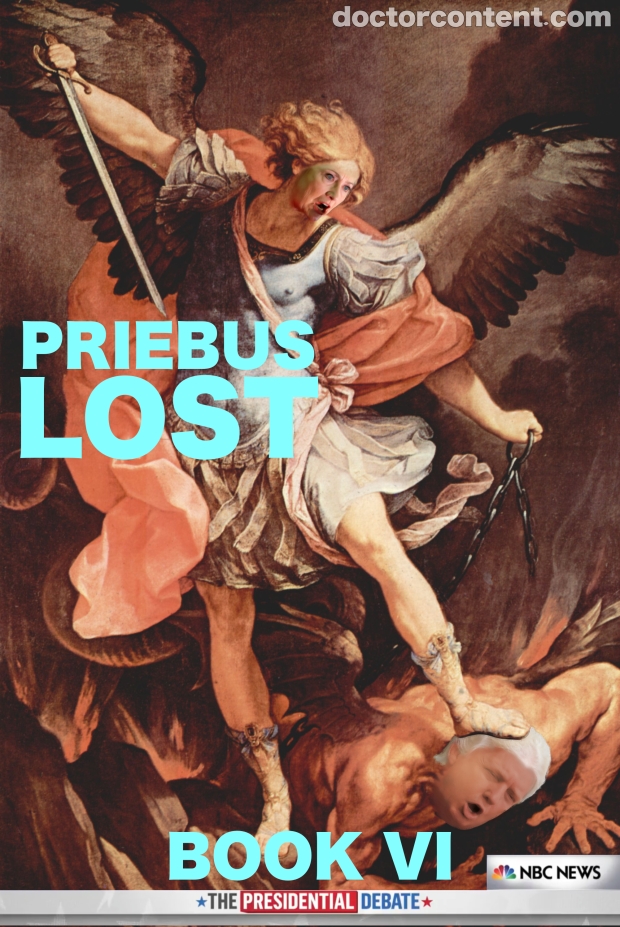 The Presidential Debates at last approaching, Hillary seeks guidance from Obama her Forebear; her wiping the floor with Trump in each Debate then described; this humiliation apparently insufficient, Trump’s disastrous month reaches its Perigee with the revelation of Pussygate. 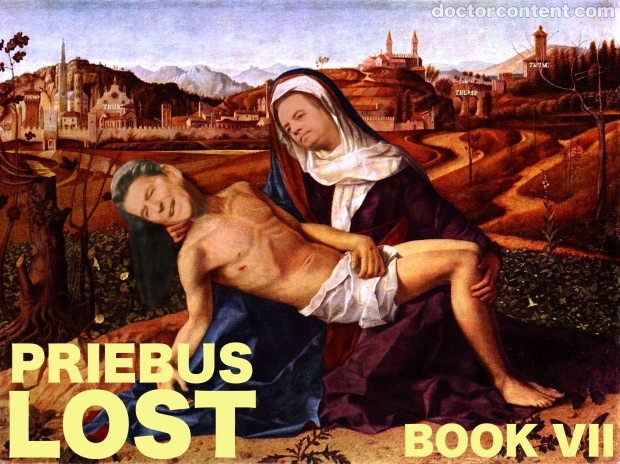 November Eighth approaching fast, and Clinton’s victory seeming sure, Priebus takes to th’Airwaves one last time in defense of his Candidate, though his private lack of faith is made clear; however one last twist is by th’F.B.I. Director reveal’d, and some slight hope at the last restor’d to the despondent Party. 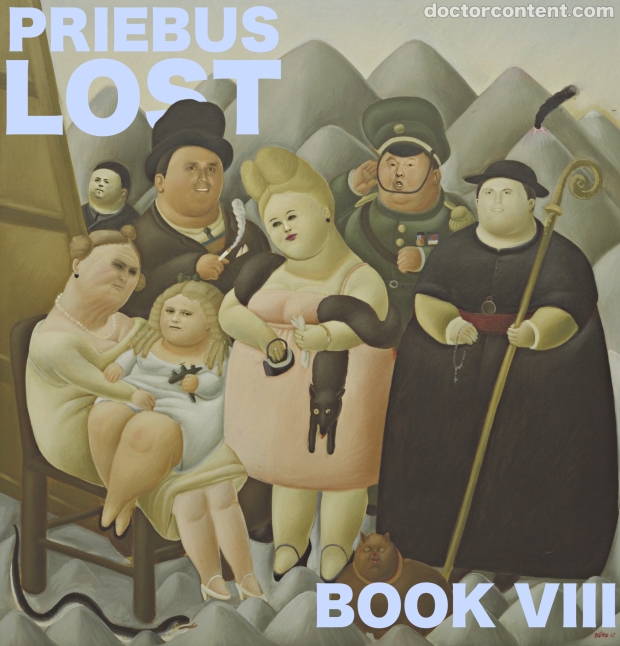 Th’Election at last upon the Nation, the late, and later still revok’d, announcement from th’F.B.I. proves crucial, and Trump to all’s surprise is voted President; Priebus, feted as th’Engineer of Trump’s success, receives his Prize, a key position i’th’ White House; the chaotic Appointments of the new Administration detail’d, and too Reince’s attempts to carve a place secure amongst the fracas. 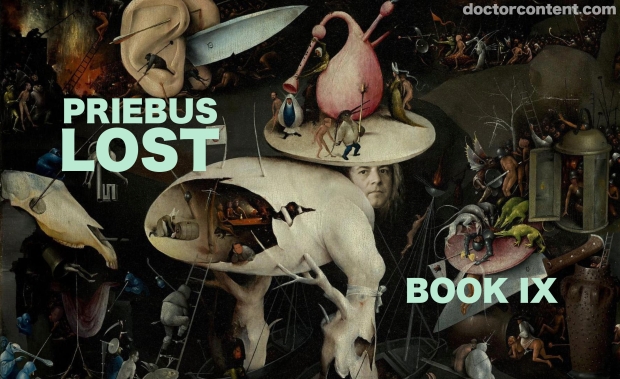 Th’upstart Trump has won the White House, but this achievement gives no cease to Priebus’ work: the Scandals of the new Administration detail’d, and the Chief of Staff’s responses to each, and too his gradual slide to irrelevancy. 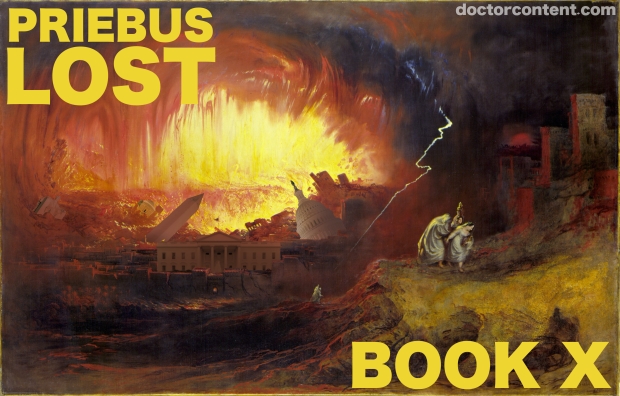