How could he let this happen? How could Ted Cruz possibly make such a catastrophic, quintessentially Freudian slip and let it go unchecked? I don’t know, but I’ve come up with four possibilities, presented below in order of increasing plausibility.

“Mr. Future President,” said Ted Cruz’s staffer, in accordance with the guidelines laid out in U.S. Senator Ted Cruz, Junior United States Senator from Texas (in the Senate)’s List of Guidelines for His (Ted Cruz’s) Staffers (Early [Which Is To Say, Ratified on the Fourth of the Month, and In Service Until Further Amendments are Deemed Necessary, So Probably Like Two Weeks from Now] September 2017 Edition). “The polls are in.”

“Huh?” said Ted Cruz’s staffer. “I thought this was what you wanted to hear!”

“But you said you wanted to be the pres—”

“Do I, though? Do I really want this, any of this? Will it make me happy? No. No, it will not. So why do I bother? I should just end it all. Guarantee my loss in the next election. Go do something that will make me genuinely happy.”

“I’m saying it’s time to press the self-destruct button. Do something that will discredit and embarrass me. That will ruin my lead in the polls.”

“Well, uh, Mr. Future President—er, Senator Cruz? Ted? I don’t know anymore—I was only feeding you those statistics because the U.S. Senator Ted Cruz, Junior United States Senator from Texas (in the Senate)’s List of Guidelines for His (Ted Cruz’s) Staffers (Early [Which Is To Say, Ratified on the Fourth of the Month, and In Service Until Further Amendments are Deemed Necessary, So Probably Like Two Weeks from Now] September 2017 Edition) said that’s what we staffers should do. It turns out that the real polls have you even with Beto O’Rourke at best, and that’s with him likely to gain once more people know hi—”

Ted Cruz sobbed. The muzzle of the gun knocked roughly against Ted Cruz’s skull, his short-cropped hair not insulating his skull enough to mask the cold, metallic feel of its cold metal.

“Still not talking, huh?” said his masked assailant, holstering the gun. “You know what, I have a better idea. I’m going to destroy everything you hold dear with one click.”

The assailant grabbed Ted Cruz’s hand and swiped his thumb over his phone’s fingerprint reader, unlocking it, before navigating with haste to http://www.twitter.com, where Ted Cruz’s official account, @tedcruz, was logged in. He clicked on the search bar and typed in @SexuallPosts.

“Wait, what are you doing?”

“Destroying you, Mr. Cruz. After this, you’ll be a joke. A laughingstock. A fool and a hypocrite.”

“Ah, so now you understand,” said the assailant. “It’s too late now. By the time you can delete it, the whole Internet will have seen it. You’ll try and cover it up, but they’ll take screenshots, circulate them everywhere. You’ll never live it down, and all it took was one click.”

“Who are you? Why are you doing this?”

“Oh, once you see who I am, you’ll know very well why I’m doing this,” said his assailant, removing his mask.

“See you in the Senate tomorrow, Ted.”

Plausibility Rating: Not Out of the Question

Through the shadows, Ted Cruz couldn’t make out the features of the man seated in the high-backed chair across from him—only that he was large, old, spoke in an absurdly bastardized version of the regional twang associated with insanely rich Southern gentlemen, had a glass of bourbon (“Pappy Vayan Winkle’s twenty-three-yeah reserve, of course,” the man had said) pinched between the pale fingers of one hand, and had just lifted his other hand to his mouth to pluck out the lit cigar which had been burning redly between his (presumably) thin and parched old-Southern-gentleman lips.

“Why did you call me here?” asked Ted Cruz.

“Weyell, I’m glad you ayasked,” replied the man, a hint of menace entering his voice. “I’m a spokespuhson of sawts for RealitehKings. I trust you know them.”

“The… pornography website?” said Ted Cruz, suddenly aware that in revealing his knowledge of the site he might have revealed too much.

“Yes indeed,” said the man. “I’m looking to advayance some of our… shall we say… intahrests… in Washington, but we need some Senatahs to get on board with our playan.”

“Are you suggesting that I advocate for pornography?” bristled Ted Cruz. “Outrageous. Even if I watched pornography, and I don’t, I would never speak in its favor. It is a moral plague that imperils our children and threatens to rip apart our families. Not mine specifically, though.”

“So you say you’re nawt on board? Maybe I just need to… how should I put it… speak your tongue.”

The man leaned forward into the light, yet his face remained as shadowed as ever. The ludicrous, excessively diphthonged Southernism of his voice suddenly took on a more vicious character.

“Let me tell you something, Senatah Cruz. The pawnahgraphy industry is big business. Bigger than you reyahlize, I think. We have our fingahs in everythang in this country. Figuratively, in this case. For the most paht, anyway. We’re worth biyyons of dollahs, and we have information on everybody. Everybody. If you give us reason to destroy you, we weeyill, without a second thought. So you’d best do what we say.”

Ted Cruz gulped. “What do you want me to do?”

Ted Cruz got the undeniable sense that the man was smiling, even though he still couldn’t make out his face.

“Nothing too seveeyah, Teddy,” the man said. “All we need is a little… gesture of your appreciation for what we do. You have a Twittah account, do you not?”

“Yes, Senatah,” the man said over the phone. “Your…contribution has been noted. Our agents are already reaping the rewahds of your endahsement: 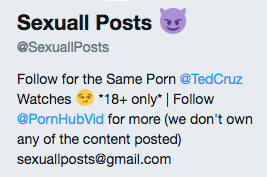 “Rest assuahed, you will be paid back in full very, very soon.”

Plausibility Rating: Yep, This Is Definitely What Happened

Ted Cruz was all alone in his office. It was, at last, Ted Cruz time. Ted Cruz got on his computer—actually, this is a bit of a misnomer; first of all, Ted Cruz wasn’t actually climbing on or otherwise mounting his computer (that is, the phrase “got on his computer” was something of a figure of speech), and secondly, Ted Cruz had already been using his computer, but for business (that is, senatorial, because that was Ted Cruz’s job, being the junior United States Senator from Texas [in the Senate] and all) business, not personal business—and went online—this too is a bit of a misnomer, seeing as “online” is a—oh, you know what, just forget it.

Ted Cruz rubbed his hands together in glee. Ted Cruz had been looking forward to this all day. Ted Cruz navigated, like an enterprising sea captain, his browser to www dot Twitter dot com, and, in an instant, saw land. “Land” referred to his Twitter feed, @tedcruz. The metaphor is pretty clear, but this clarification made it absolutely sure.

This was, after all, the one and only way to find pornography on the Internet.

Ted Cruz viewed the fleshy spoils now laid before him, ripe for his consumption. Ted Cruz had his pick of a world of carnal delights; quickly, he laid eyes on a video posted by some channel calling itself @SexuallPosts. Oh yes. This would be a fun—

Dammit. It was one of Ted Cruz’s staffers, threatening to walk in on his onanistic reverie. Hastily, Ted Cruz clicked the heart under the tweet so that he could find it later. That’s what it was for, right? Ted Cruz was not the most up-to-date on Twitter, but as the Internet’s one and only source of pornography, he could trust them to be discreet about his preferences and viewing habits.